“The principle consideration of the architect is to design his course in such a way as to hold interest of the player from the first tee to the last green and to present the problem of the various holes in such a way that they register in the player’s mind as he stands on the tee or on the fairway from tee to green.” – William S. Flynn 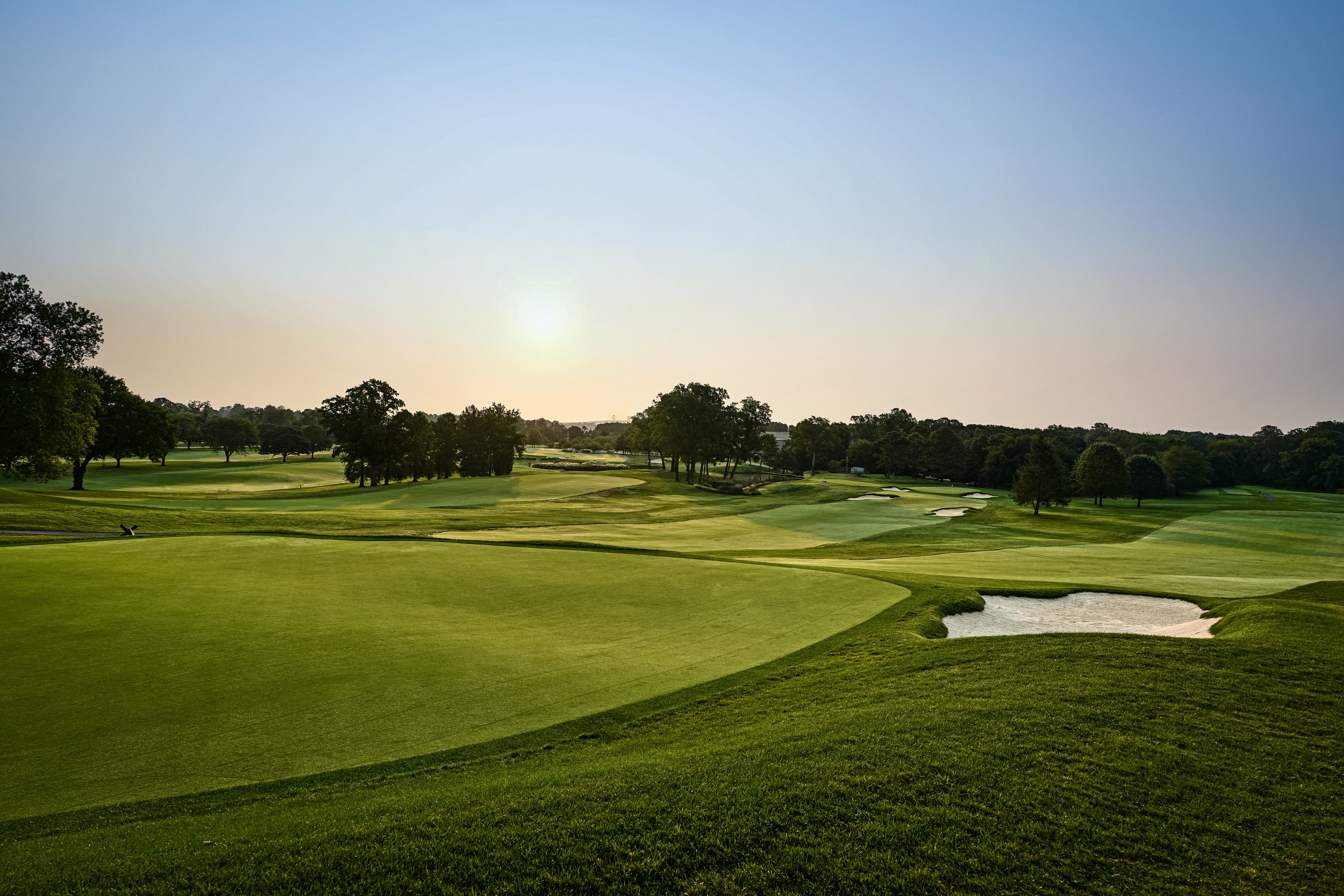 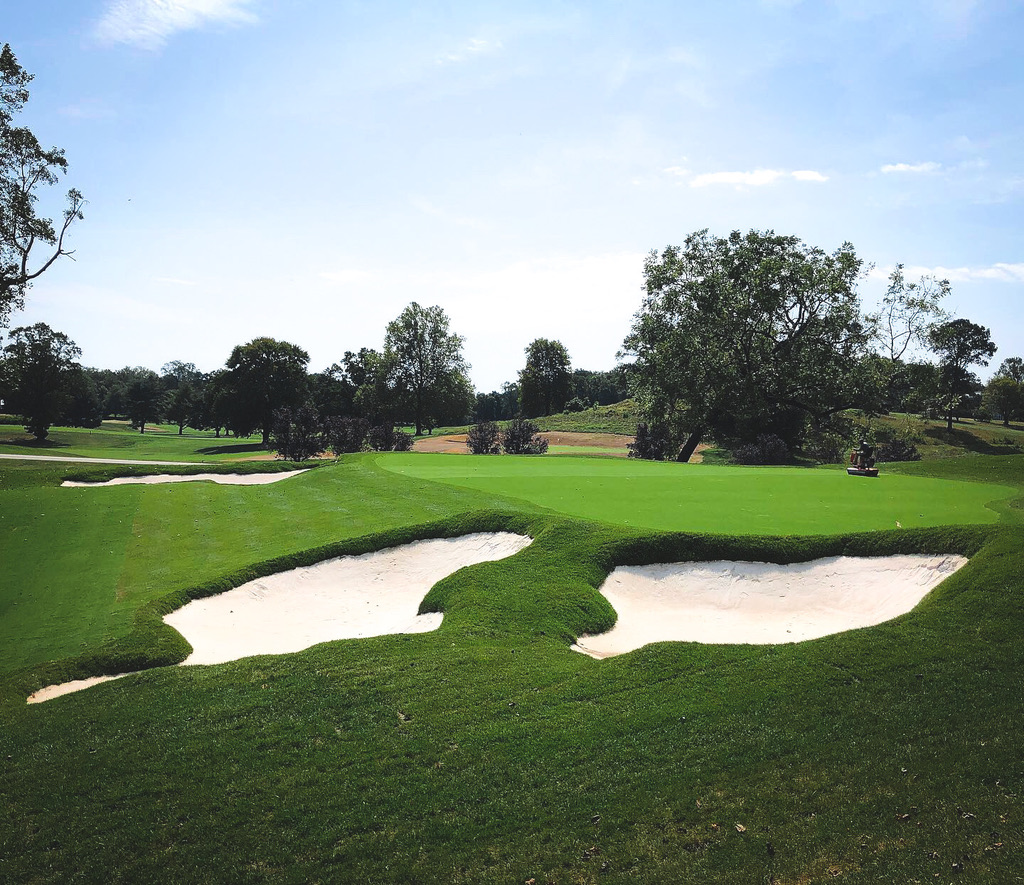 The Naval Academy golf course was realized in 1938, when the U. S. Navy purchased the surrounding land on Greenbury Point in order to expand their radio communications facility. The acquired land included the eighteen hole golf course developed in 1928 by the Greenbury Point Yacht and Country Club, but had become abandoned during the Great Depression.

Over the next two years, the Navy restored nine of the eighteen original holes and in 1940, the Naval Academy Golf Club opened for play. In 1942, William Flynn was contracted to design and develop a course composed around the existing nine holes. Flynn’s selection was an ideal choice, given his uncanny ability to blend manufactured features with the natural landscape.

After two years, Flynn’s redesigned Naval Academy course debuted in 1944. The finished course included eleven holes south of Greenbury Point Road and seven holes north of the main road, and incorporated the rolling terrain of inlets and surrounding tidal rivers of the Chesapeake Bay, along with views of the Bay Bridge in the distance.

Further expansion of the radio facility eliminated two of the holes south of the road and two holes, the present numbers 13 and 14 were added. This completed the layout that exists today with the front nine south of the road and the back nine north of the road. Flynn’s design emphasized his strategy of “preferred line of play” in which the golfer is encouraged to place his shot with thought for advantage on the subsequent shot.

A chipping and putting facility was introduced between the driving range and back nine holes. The ability to fine-tune technical short game skills offers a new dimension to the member experience at Navy Golf. Just across from the chipping and putting facility, stands the new Gurneé Sports Performance Center, which features a series of enclosed hitting bays will allow for year-round practice. State-of-the-art video equipment and swing analysis technology will provide Navy golfers with a competitive edge with their training.

The Gurneé Performance Center was made possible by the innovative thinking and extreme generosity of Ted and Michelle Gurneé. Ted was a USNA Alumni, class of ‘61, and former squash and golf student-athlete. His Navy Golf teammate and close friend, Mike Moynahan ‘61, worked with Ted to design the Performance Center. The first hitting bay is dedicated to him. The short game area was provided through the generous donations of Ron Council and David Dorton ‘90.

Beginning in 2018, and over the next several years, NAGA will commit to the renovation of Greenbury Point. We will begin the restoration of William Flynn's vision with a bunker refurbishment as Phase III and IV of our capital project. In Phase V, we will create a complete set of greens, restoring missing green space and providing sustainable surfaces for the future. We will protect the investment in new turf with an updated irrigation system in Phase VI, and enhance playability with new fairway turf in Phase VII. This lengthy and comprehensive undertaking represents the next chapter in the legacy of Navy Golf.

Scroll down to explore a hole-by-hole overview of the course.

A challenging opening hole that requires an accurate drive across the pond and a precise second that plays two or three clubs more up the long, steep hill to a severely pitched putting green. Renovated putting green now provides challenging front left and back left hole locations. The spring prevailing wind is in your face the entire way.

Tempting to drive the green for the college players from the upper tee, but the optimal second shot is from about 90 yards to a turtle back putting green. Fairway bunker on the left must be avoided at all costs, but a drive too far right will leave you stymied by a large oak tree.

A reachable par five for the long hitters, a lay-up to just short of the large fairway bunker at 90 yards out for the rest. Any shot to the putting green must be spot on. New front left hole location is demanding, with little margin for error.

The putting green, which had been one of the smaller greens on the front nine, is now one of the largest, a full 10 yards longer and wider in the corners. The center is still the best target to avoid bunkers front right and on the left. A penalty area well right awaits a stray shot.

The drive zone left is guarded by a difficult fairway bunker that is 20 yards long. There is room off the tee to the right, but the uphill second shot to a shallow, sloping, multi-level putting green is hard to measure, especially when the wind blows down the hill. There are now two very deep bunkers guarding the front right approach to the green.

Easiest hole on the front nine where a well-placed drive, which avoids the fairway bunkers, will leave a short second to an enlarged putting green. The greenside bunkering now pinches in on the corners, so don't get too greedy.

Cross the water to a narrow, saddle back putting green with bunkers on both sides. The left bunker is extremely deep and will lead to a bogey - or worse.

The first of four par fours in a row, from the back tee this one is a beast with the approach guarded on the right by a long, deep bunker known as the 'Pit of Death.' The putting green is sloped more than it appears. Bunkers front left and middle right of the green await as well.

Out of bounds down the entire left side on this long par four can get into your head. Requires a long second into a well bunkered, very large, two-tier putting green which is very difficult to read.

Closest hole to a true dog-leg at Navy, the tenth bends left around two fairway bunkers, requiring a well-placed tee shot, followed by a second that better not come up short. New front right hole location requires a precise second shot over deep bunkers to set up a birdie try.

The tee shot is guarded by large trees left and an out of bounds fence running all the way up the right side, just yards from the fairway. A blind second to a very narrow putting green with steep drop-offs on both sides and behind requires your attention. A fairway bunker about 50 yds. short of the green will create a depth perception problem, so measure carefully.

A completely new hole, this reverse Redan par 3- with the green sloping from front left to back right and 38 yards long is the toughest of the four par threes at Navy. Well bunkered on all sides as well as short and left of the green. If you miss, miss long. The teeing areas are all elevated, and range in yardage from 295 to 155. Tighten your spikes, as there is no let-up from holes 12 through 15 - Navy's 'Amen Corner.'

The second of three completely rebuilt holes, 13 is now a three shot par 5. A lengthy carry of a gully is the first shot of three. The second shot, a lay-up, is the easiest shot on the hole. The third shot, likely a short iron or wedge, is to one of the largest greens on the course, with several very challenging hole locations, protected by deep bunkers and steep fall offs. A par is a very good score here.

With the green, surrounds, and bunkering completely rebuilt, this hole has gone from an easy par 5 to a lengthy, challenging par 4. A downhill, blind drive is the easy shot on this hole, but you need to be in the fairway. Most players will be left with a hybrid or mid iron to a long, narrow green, open on the right but protected by two very deep, penal bunkers left, that must be avoided at all costs. Par is your friend here.

Straight away from an elevated tee. Originally one bunker on the right, is now two, and they have been moved about 20 yards forward and to the left, pinching in the fairway and presenting more of a challenge for the longer players and less for the shorter ones. The front of the green is guarded by four bunkers and a fifth has been added to the right side. The front left hole location is the most visually intimidating, but front right may be the most difficult once on the green.

With 'Amen Corner' behind you, you can't afford to be careless here. Off the tee, hit the club that will leave you a second from 125 to 100 yards out, to one of the smallest putting greens on the golf course, well guarded by bunkers front and left. The putting green has a new back left hole location that will tempt you.

A short hole from an elevated tee to a severely sloped and shallow putting green, perched on top of a knob, surrounded by very steep drop-offs on every side. Club selection can be a guessing game when the wind blows. This hole is the least changed of all. However, a miss left is not as penal as before, with the opportunity to putt or chip and run a recovery up the hill to the green. Center of the green will leave a makeable birdie putt to any hole location.

A tough finishing hole, out of bounds to the right and trees with a sharp drop-off to the left. To complicate your club selection from the tee, a very deep fairway bunker now guards the right side, just short of the 150-yard marker. Risk driver off the tee to leave a shorter iron, or play it safe with a fairway wood and leave a mid-iron second shot. The green is very large - 38 yards long, and well guarded on the right front corner by a deep bunker. A par to finish your round is a job well done.